Once again, the easter weekend is over and I find myself sitting at home writing this post baffled by how it feels to be somewhere so quiet.. But it’s just what I need after the best Revision ever. I mean, how awesome it is to be made into a “MtG” card? 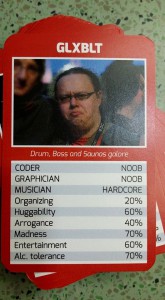 Despite being a ‘hardcore musician’, 8 months have passed and I haven’t released a single minute of music. For the easterparty of my heart I just could not continue my inactivity however, since I hate the feeling of going to a party without anything to submit to the competitions! So, during the day before the party, I dug up an old project file which I had made a mental note on “finishing someday” and decided that this would be the day.

Originally when starting out with the tune I was going for some kind of The Prodigy imitation, but apparently breaking out of the drum & bass mold is a bit harder than just lowering the tempo.. So I kind of gave up and now it’s a weird, aggressive 165bpm beast of a tune with Indian vocals & instruments. So, without further ado, here it is:

So, that’s my return as an active demoscener. However, it’s not the only thing coming back..